Dear Mr Duddridge,
I am aware that it was first John Major’s government that first agreed to the EUs commitments for us all to reduce our collective carbon emissions, matched by the then oppositions’ similarly commitment, repeated at 3 general elections. Hence, no doubt the governments advice to us all since then to reduce our energy use.
The attached photo is of my rooftop hot-water solar panels – in the shadow of leaves still on their tree at the beginning of December. This has not happened in previous years.
So much for following the governments’ advice; I myself have simply become a victim of Global Warming in my small way. Clearly this problem cannot be solved by ordinary citizens, or by lecturing us.
So I feel that I am entitled to an explanation from someone `over there’ for why our UK Kyoto-included carbon-emissions have been so unnecessarily rising instead of falling since 1997, and for example

As our representative of the supposed party of `responsible citizenship’, I am sure that you too want answers to all the above. So can you help me in my case? What recourse do I have over these broken commitments?
Yours,
Roger Thompson 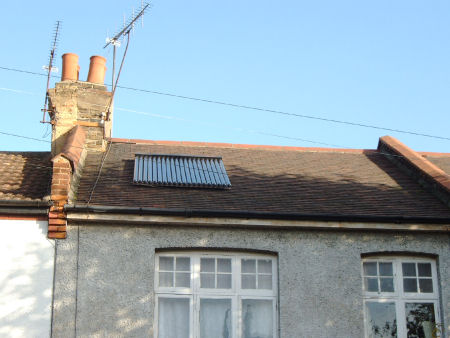 House of Commons, 9th February 2007
Dear Mr Thompson,
Thank you for your recent correspondence regarding the environment and climate change. You are probably aware that I am deeply interested in and committed to environmental issues.
I agree with many of the points you have made in your email and feel that the government has let us down by not recognising the magnitude of climate change. As you are aware, the recent report published by Sir Nicholas Stern sets out the economic cost of climate change. Sir Nicholas has said that the scientific evidence for global warming is overwhelming, and that global warming could have disastrous consequences. This is a fact that is fully recognised by the Conservatives. We realise that action needs to be taken by everyone including business, individuals and Government.
I share your disappointment about many of the missed opportunities and broken promises that you outline in your email. This is why Conservatives called for a Climate Change Bill to be included in the Queen’s Speech. What we must now do is to ensure that we get a solid Bill with teeth, not a watered-down version. I believe that any serious Climate Change Bill must have three things: rolling annual emissions targets; an independent body to set as well as monitor these targets; and an annual report from the Government on how they plan to make progress in this important area.
In addition, I have decided to write to the Department for the Environment, Food and Rural Affairs outlining your concerns about government policy with regard to climate change. I will of course contact you as soon as I receive a response.
Thank you again for taking the time to write to me.
Yours sincerely,
James Duddridge MP

22 February
Dear James,
Thank you for your letter of 9 February to David Milliband enclosing a copy of an email from your constituent Mr R Thompson about climate change.
I would like to re-assure Mr Thompson that the government takes climate change extremely seriously. We are committed to tackling climate change at a national and international level. A great deal of action has already been taken in this country - no industrialised country has done more than the UK. The UK is one of only two countries in the EU-15, the other being Sweden, that is one course to meet its targets under the Kyoto Protocol - in fact the UK is well on course to exceed its Kyoto
target. However, we also recognise that more can and must be done to meet the challenges climate change presents.
The government is already addressing the way we create and use energy. This is key to tackling climate change, and conversely meeting our climate change objectives is a key priority for any energy policy. This is reflected in not only the Energy Review but also the Climate Change Programme, both published last year. The Energy Review contains a range
of policies designed to move us towards increased energy efficiency, and increasing reliance on renewable energy sources. The policies identified in the Review are intended to deliver 19-25MtC savings by 2020, and sets us on the right path to achieving our goal of cutting the UK's carbon dioxide emissions by some 60% by 2050. Measures contained within the Climate Change Programme are projected to reduce UK emissions of all greenhouse gases by 23-25% by 2010, around double the target set under Kyoto, in addition to the savings delivered by the Energy Review.
Additionally, the Government recently established the Office of Climate Change (OCC). This will be a shared resource reporting to Ministers across Government. The OCC will have a vital contribution to make ensuring that the analysis and policy work going on across government is coherent and supports our overall strategy to tackle climate change. The
OCC will support Ministers as they decide future UK strategy and policy on domestic and international climate change.
You may be aware that the Stern Review on the Economics of Climate Change was published on 30 October. It destroys the economic argument that we cannot afford to reduce our emissions. Climate Change, not action to tackle it, is the threat to growth. I am pleased that the government has announced in the Queens' Speech that climate change legislation will form a fundamental part of the UK's strategy to tackle climate change and address the issues raised by the Stern Review.
The legislation will put in place a strong long-term framework of policies and targets for emissions reductions which will provide a firm basis on which business could plan ahead. It will enable the UK to benefit economically by becoming a leading low-carbon economy ahead of our competitors and will also demonstrate the UK's commitment to taking action at home and so strengthen our ability to be global leaders in developing a future global climate change framework.
The climate change legislation will comprise four key elements; the Government's long-term goal to reduce carbon dioxide emissions by 60% of 1990 levels by 2050 will be put into statute; the establishing of an independent body - the Carbon Committee - to work with Government to reduce emissions across the economy; the creation of enabling goals powers to put in place new emissions across the economy; the creation of enabling powers to put in place new emissions reduction measures needed to achieve our goals; and the improvement of monitoring and reporting arrangements, including how the Government reports to Parliament.
Some people are calling for binding annual targets to be included in the forthcoming legislation. However, annual emissions are affected by things beyond the control of Government such as fluctuations in the weather and energy prices. For this reason, annual targets were rejected in the international climate change negotiations in favour of a longer timeframe.
Our aim is to create legislation that will help in the battle against climate change, support the efforts to join individual activity with business and Government leadership, and link domestic and international action. What we are proposing represents an ambitious and coherent package. The legislation will be introduced as soon as parliamentary time allows and the Government will promote the widest possible debate across the country and in Parliament about the contents of the Bill.
While I am proud of our record on tackling climate change and the international leadership we have shown, I am not in any way complacent. We will continue to work to meet that challenge, domestically and internationally, and I know that I will have your support in that vital task.
Ian Pearson, MP
Minister of State for Climate Change and the Environment.
DEFRA