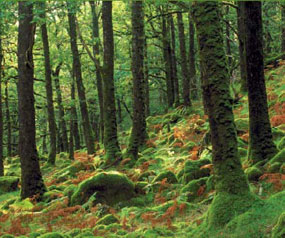 WOODEN TOPS: The coalition is up a gum tree with its uneconomic plan to flog off England’s forests

THE coalition clearly can’t see the wood for the trees if it thinks its plan to sell vast swathes of Forestry Commission land in England makes economic sense. In 2009 an attempt by the Scottish National Party to lease Scotland’s national forests to private firms was opposed by all political parties.
It was recognised, among other things, that as well as threatening jobs and access, any firm taking over the land and continuing forestry would still be eligible for public funding. As MSP Elaine Murray said at the time, logging firms could “chop down timber that was planted at public expense, walk away with the profit and then get paid to plant more trees” (Eye 1228).
The same issue exists in England, where the cost of regulating and dishing out funds to private forestry companies is likely to outweigh the money raised from land sales. Lorraine Adams, branch president for the scientists’ union, Prospect, which represents more than 200 researchers, cartographers, rangers and skilled Forestry Commission (FC) workers, has uncovered evidence of this since the FC already sells off land occasionally. When it recently flogged an area of woodland for £60,000, for example, the new landowner immediately applied for funds under the English Woodland Grant Scheme to grow and cut timber and was given assistance totalling £55,000.
The private landowner will also be able to come back and ask for more grants in future – as well as bidding for other environmental stewardship and rural development subsidies available to forest owners – while the government can only sell the land once.
So will the coalition cut back on grants so the sale makes economic sense? Er, no. In an attempt to head off the more alarming protests – suggestions that buyers would develop huge holiday parks or housing estates – the Department for the Environment, Food and Rural Affairs said in a statement: “Full measures will remain in place to preserve the public benefits of woods and forests under any new ownership arrangements. Tree felling is controlled through the licensing system managed by the Forestry Commission, public rights of way and access will be unaffected, statutory protection for wildlife will remain in force and there will be grant incentives for new planting that can be applied for.”
Then there are the earnings the FC will lose from no longer selling timber (around £61m in 2008). Thanks to that cash, it costs the taxpayer just £15m a year to regulate and license the private forestry sector, plus providing numerous education schemes and leisure access to woodland, not to mention the FC scientists who do vital research to combat tree diseases – such as sudden oak death (now devastating larch trees in the south west) and pests like leaf miner moths which attack horse chestnuts.
Harper’s bizarre
Anger at the proposed sale is particularly acute in the Forest of Dean, where a campaign group, Hands Off Our Forest (HOOF), has been mobilised and 3,000 people rallied earlier this month to make their voices heard.
Notably absent was local Tory MP Mark Harper, who believes the forest sale to be an example of Dave’s Big Society in action as it would allow local people to buy and manage things as they see fit. As environmentalist Jonathon Porritt and many others point out, however, thanks to rights and entitlements secured over centuries, people in the Forest of Dean already see “the Dean” as their forest anyway.
The strong relationship between the foresters and the local Forestry Commission is largely down to longstanding mutual respect and an understanding well beyond the financial realm of what “ownership” of this precious resource means. For Harper to offer to sell people something they already believe to be theirs could be a suicidal electoral strategy for the ex-KPMG accountant.
The last Tory MP to trip up in the Forest of Dean was one of Harper’s predecessors, Paul Marland. He favoured the Thatcher government’s attempt to sell the Forest Estate in the early 1980s. But public pressure on him was so intense he managed to secure an exemption for the Forest of Dean, concluding: “I regard the possible sale of the Royal Forest of Dean and other Crown Forests to faceless investors as a national disaster. The Royal Forest of Dean is steeped in ancient history and tradition. Today’s Forester is of the same independent mind and rugged character as were his forefathers. It is our duty to preserve his ancient rights and traditions.”
If Harper disappoints his constituents, he could become the first victim of another coalition brainwave: the “right of recall” which enables voters to recall an MP if they lose faith in him or her. This would be ironic. When Harper isn’t calling for the sale of his constituents’ natural environment, he is the minister for constitutional reform responsible for… the right-to-recall policy!
This entry was posted in Media, Private Eye and tagged Forests. Bookmark the permalink.