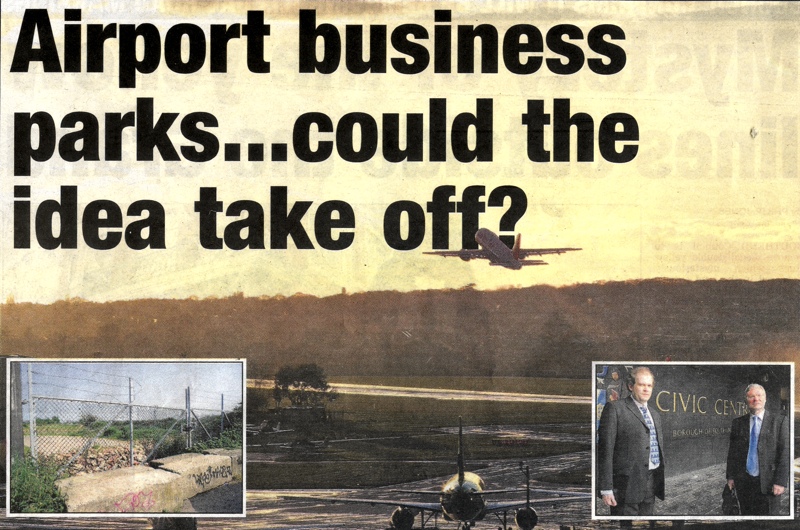 By IAN WEINFASS
ian.weinfass@nqe.com
IS it a crucial plan which will generate jobs and prosperity for the towns near Southend Airport? Or a pie-in-the-sky, possibly damaging plan which should be thrown out?
Southend and Rochford councils have designed a Joint Area Action Plan for the future of the airport and the area around it for decades to come.
Among its ideas are plans for new business parks which would create a combined total of more than 5,000 jobs, as well as encouraging further growth of the airport itself to further boost the economy.
The Saxon Business Park, which would be built on green belt land north of Aviation Way, and including a medical technology centre, could create 4,950 jobs.
As a result of the moves, improvements to transport links have also been promised, including new access roads to the business park and work on key junctions including the Bell and Kent Elms junctions on the A127.
Government planning inspector David Smith is deciding on the viability of the scheme, having heard several days of evidence.
Rochford Tory councillor for planning, Keith Hudson, said: “The principle of the plan is to ensure we get a coherent approach, as opposed to ad hoc developments.
“It’s extremely important for Rochford and Southend in that it will provide many new jobs for residents.”
Unsurprisingly, the operators of Southend Airport back the scheme.
A spokeswoman said: “We’ve worked very closely with both Southend and Rochford councils throughout the six years of its redevelopment, during which £130million has been invested in the local economy and more than 500 jobs created.
“Therefore, we’re fully supportive of the joint area action plan as it will lead to further new jobs and economic prosperity for our area.”
Leading the challenge to the plan at recent hearings have been Jon Fuller and Denis Walker, from South East Essex Friends of the Earth.
Mr Fuller, the group’s co-ordinator, said: “The proposal that businesses will want to move to the end of a busy runway seems fanciful.
“A lot of businesses won’t want too much noise nearby and it is wishful thinking they will come to the Saxon Business Park.”
He also maintains Government and international policy regarding the importance of reducing greenhouse gas emissions means airports should not be expanded and new roads should not be built.
Concerns have also been raised about the increased risk of flooding which could come from building in the area.
The action plan document itself describes a proposed extension of the maintenance and repair centre at the airport as “being in an area at high risk of flooding”.
Neil Wells, the secretary of the 120-year-old Rochford Hundred Golf Club, addressed the planning inspector recently, outlining his fears for the future of the course – which already floods occasionally.
He also said he fears increased testing of jet engines at the airport could be unbearable for members.
David Lister, director of operations at the airport, said: “Southend Airport continues to operate within the controls agreed with Southend and Rochford councils in 2009.”
He added noise monitoring shows the airport is sticking to strict limits on noise and that “as its 2012/2013 annual report shows, the airport has delivered against its promises for growth and employment while performing well against the set targets.”
Peter Geraghty, Southend Council’s head of planning, said “The Joint Area Action Plan proposes that if applications are made for development on areas at risk of flooding, a flood risk assessment demonstrating the development will be made safe without increasing the risk of flooding elsewhere will be required to accompany it.”
Mr Smith is expected to make his ruling in a few weeks, after considering all the evidence.

Plans for Saxon Business Park, on land north of the Aviation Way Industrial Estate – including medical technology centre, developing cutting-edge equipment, which would alone create 4,950 jobs, it is said.
Another new park at Nestuda Way would also be built, creating 500 jobs and redevelopment of the existing Aviation Way Industrial Estate would create 750 jobs, it is predicted.

The councils will support the growth of the airport to a capacity of up to two million passengers a year – up from the current one million.
A runway extension of about 300m would be made operational to accommodate this – while being subject to strict controls. [This runway extension has, of course, already been built.]
Further terminal extension applications would be welcomed, as would most airport -related planning applications.

There would be a new a access roads to enable access to the new business parks.
Improvements to the Bell, Kent Elms Corner and Tesco roundabout on the A127 would be needed to cope with increased volumes of traffic.
Work would also take place to improve the Ann Boleyn roundabout at the end of Sutton Road, the Ashingdon Road/West Street roundabout, the Sutton Ford bridge and to the Hall Road/Cherry Orchard Way junction.
Developers working in the area will also be expected to make provision for walking, cycling and public transport access.